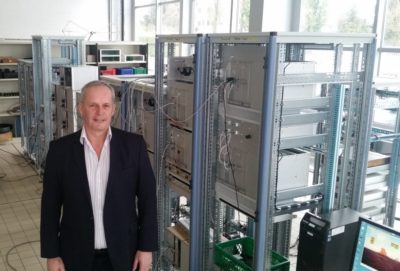 25 February, 2019 – Public safety organisations will be able to get expert advice on TETRA and LTE interconnection at the upcoming BAPCO trade show, thanks to a presentation from radio communications specialist ETELM.

Paul Ward, International Sales Director at the firm, is one of the key speakers at the event, which draws together the annual conference and exhibition for all organisations involved in TCCA’s Critical Communications Europe event for the very first time.

His presentation will guide attendees through the main technical differences between TETRA and LTE. Both technologies have useful applications in mission-critical spaces, with TETRA having been specifically designed for these contexts, while LTE’s commercial contexts have been proven and its mission-critical critical standards are ongoing.

However, as data-rich applications such as live video and artificial intelligence become more prevalent in public safety and other critical communications settings, the narrowband spectrum of TETRA brings limitations.

Paul Ward said: “With the UK’s first commercial rollouts of 5G networks due to take place later this year, it is the perfect time to be communicating with the public safety and critical communications sectors about the fantastic potential of LTE technology – and the importance of gradual transitions between TETRA and LTE, if that is the chosen approach.

“Downtime is simply not an option in public safety settings; communication networks don’t get much more mission-critical than those underpinning emergency services. As such, it is very important for this sector to understand the different technical and operational implications of TETRA and LTE, and how the two technologies can work together to ensure seamless transitions.”

ETELM is headquartered in Paris and is a private developer and manufacturer of TETRA and LTE infrastructure. It has supplied mission-critical infrastructure to organisations across the security, military, government, transport, oil and gas and utilities sectors for nearly four decades.

BAPCO 2019 takes place on the 12th and 13th of March at the Ricoh Arena in Coventry.

ETELM begins work on final phase of European Union-commissioned BroadWay pilot Frequentis-led consortium down to the final two in developing interoperable Public Protection & Disaster Relief (PPDR) mobile broadband system October 2021: ETELM, the radio communications infrastructure specialist, has entered the third and final phase of its work with the BroadPort consortium to develop a pan-European interoperable mobile broadband system for Public Protection & Disaster Relief (PPDR) users. Having successfully completed the Prototype Phase, ETELM is part of the Frequentis-led consortium that is among just two consortia left in this European Pre-Commercial Procurement (PCP) Project, BroadWay. They have now been invited to move onto the next phase, which will be to develop the prototype solution into a live, useable pilot system. The BroadWay initiative was created by the public safety agencies from 11 European countries and is operating under the framework of Horizon 2020, a flagship EU research and innovation programme. Collectively, these agencies provide mobile communication services to around 1.4 million responders and deal with an array of crimes and disasters throughout the continent. Where currently each country possesses its own separate system to handle mission-critical communications, the objective of BroadWay is to develop a unified solution that will allow European first responders to communicate, share and access information regardless of the country in which they intervene. This will provide operational mobility for public safety responders across Europe by linking national mission-critical mobile broadband networks to act as one. Now at its pilot stage, the consortium is required to develop a solution that reaches Technology Readiness Level 8, a system originally developed by NASA to provide uniformity of technical maturity across different technologies. Level 8 will require a complete and fully operational system that achieves the best possible performance across each of the project’s 11 objectives. A primary goal will be to ensure that the pilot system succeeds in being interconnected and provided as-a-service to offer the widest operational mobility. In particular, it must provide secure operational and EU interoperable communication for law enforcement agencies and other PPDR practitioners so that they are able to protect and respond in cross-border cooperation. Operational mobility of this standard will allow practitioners to operate wherever they are, whenever they need to, and with whomever they are tasked to cooperate. Nicolas Hauswald, CEO at ETELM, said: “The impact of this innovation-led project will be felt by all police, firefighters and other emergency units when dealing with any cross-border incident or disaster as it unfolds. It will also become an essential tool in managing public safety, enabling enhanced security and more effective emergency responses. “ETELM has been developing professional radio communications infrastructure for over 40 years, working with critical communications organisations around the globe, and we are very proud to bring our expertise to this important project. “The demands of critical communications require not only robust and reliable solutions that can operate in any situation, no matter the environment, but also the capacity to transmit increasingly rich data without delay. Add to this the need to seamlessly integrate across numerous different jurisdictions and our challenge here is to demonstrate a single, future-proofed system that will enable emergency services, first responders and critical national infrastructure operators across Europe to complete their essential duties not only unhindered but also significantly enhanced by the technology that we are developing. It’s an exciting prospect, and we are fully committed to its success.” The BroadWay Pilot Phase (Phase 3) begins in October 2021 and will last until September 2022. The full BroadPort consortium, led by Frequentis, consists of the following partners: ETELM, Crosscall, Halys, Municipality of Málaga, Nemergent Solutions SL, and Universidad de Málaga. The subcontractors are: Arico Technologies, Control Center Apps GmbH, Comfone, Eutelsat SA, Lyfo, PrioCom B.V., Telefónica I+D, T-Mobile Netherlands B.V., and Virtual Fort Knox AG.
Lire la suite…

ETELM to develop a Tactical Communication system for the INTREPID project consortium to improve indoor and outdoor exploration ETELM has been named as part of the INTEPID project consortium. This three-year, EU-funded initiative aims to develop an innovative platform to help first responders make more informed decisions when they arrive at the scene of a hazardous incident, enabling safer and faster exploration of disaster sites. The challenge During the immediate aftermath of a disaster, whether natural or man-made, first responders often cannot rely on pre-established public operator networks for critical communications as these can quickly become overloaded or even collapse. This frailty in public networks can lead to a serious lack of reliable information and deep uncertainty about the environment and the nature and location of victims and threats, which seriously disadvantages first responders’ ability to react to the disaster. The solution INTREPID, which stands for Intelligent Toolkit for Reconnaissance and assessment in Perilous InciDents, aims to address this problem. The project consortium is developing a standalone platform that seamlessly integrates intelligence amplification and extended reality concepts with unprecedented smart cybernetics assistants and innovative deep indoor networking and positioning capabilities. This will allow first responders to immediately start operations without having to wait for specialised teams or for the zone to be fully secured. The INTREPID tool kit will equip teams with reliable and accurate information so that decisive action can be taken, faster. The consortium INTREPID is being developed by a consortium of 17 partners that includes a combination of end users, research and technical development experts as well as support partners, all brought together to develop a state-of-the-art critical communications network. In July 2021, the INTREPID consortium was awarded €6.8 million by the European Commission to further the development of the project. ETELM, as a professional (mission and business critical) radio expert and equipment manufacturer, will be contributing its expertise to help develop a Tactical Communication System to improve both indoor and outdoor exploration capabilities. The system will provide a private secure network with a dedicated radio coverage that will enable resilient mission-critical communications and tactical information exchanges in the field, including rich media. ETELM will also be developing a Tactical Range Extender solution to enhance indoor coverage, enabling the INTREPID network to reach areas where signal propagation will be otherwise limited, such as underground or deep indoors. Live disaster scenarios As part of its development, the INTREPID platform will undergo rigorous testing to validate its effectiveness judged by its performance during three live pilots, each built to test its reliability and functionality during various critical scenarios: November 2021; a metro station flood in Stockholm TBC 2022; a plant explosion at a SEVESCO site in Marseille July 2023; a hospital explosion in Madrid Nicolas Hauswald, CEO of ETELM, said: “We’re currently in a time of frequent natural and man-made disasters which means that our first response teams are repeatedly put under immense pressure to make critical decisions in hostile environments. However, despite the increased expectations of response teams to act efficiently, signal blackouts caused by unreliable networks are still a frequent problem preventing urgent communications to take place. “ETELM is dedicated to providing response teams with a modern and effective resource to combat this growing problem. We hope that by providing the insights that our 40 years of industry experience has given us, will enrich the consortium to develop an advanced tool that allows first responders to address crisis situations as effectively and as safely as possible.” Dr Olivier Balet, CS Group and INTREPID project coordinator, said: “We believe that advanced drones and robots that can collaborate with each other through enhanced situational awareness and onsite assistance thanks to extended reality and intelligence amplification concepts will offer first responders an unprecedented head start when operating in hazardous areas. “INTREPID will revolutionize rescue operations and we plan to bring these innovations to the market in the next couple of years.” This project has received funding from the European Union’s Horizon 2020 research and innovation programme under grant agreement No. 883345.   For more information, visit https://intrepid-project.eu/.
Lire la suite…